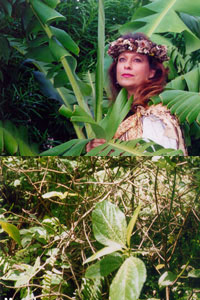 The following writing is for informational purposes only. We do not provide healing or herbs, and we are not doctors. The Rev. Alalani has prepared this information which has been passed down by Kahuna from through the generations, as an archive of practises which the Hawaiian Kahuna used but which has not been proven scientifically. This information is presented as a historical record and should not be used in any way without consultation of a licensed Medical Doctor.

Although the Reverend Alalani is known as a Hawaiian Healer she does not practise medicinal healing but is happy to offer personal blessings and spiritual guidance. Neither Alalani nor Kuhina make any claims as to the results obtained from her blessings.

You will find many rare Hawaiian herbs and preparations below. These practice La'au lapa'au (gathering) and are prepared with pule (prayer). Most are gathered in accordance with the Hawaiian moon calendar. We will share with you information about how the Kahuna la'au lapa'au have been using these herbs in the past. Most of the recent recipes were passed on or inspired by "Papa" or the Kahuna or Kupuna of la'au lapa'au of Maui. Remember that none of these claims are guaranteed or endorsed by Kuhina or the Rev. Alalani. As with any medical concern any practises or uses of any of these herbs should only be performed under the consultation and recommendation of a Medical Doctor. All benefits stated are not claims but illustrations of previous uses and beliefs by Hawaiian Kahunas.

These items you can purchase as they are not for ingestion nor are they claimed to have any medical benefits.

Lei ano ano (seed lei's) We make and sell a beautiful selection of seed, shell, wood and nut leis. We custom choose leis for your special occasion on or off the islands. You can see different types of lei ano ano in the photographs throughout this site. Leis hold special meaning here in Hawaii. You may read about Kukui leis at Hawaiian Ceremonies Lei styles vary. Prices range from $5-$50.

Hawaiian Lomi Ko'o sticks: Massage sticks which can be used to massage the self and others. The greatest however is the hard to reach places in the back of your body. They are sanded and shaped. You can meditate, and center yourself with these sticks. You may also be able to communicate with the Spirit in the wood to receive the guidance you need in your life. Your sacred symbols may also be added to the stick. Suggested donation is $200. Only one per person. They take a lot of work and Alalalani will need 1-4 months to complete them.

None of the following items are for sale as we make no claims to their effectiveness nor the accuracy of their usage.

'Awa is a root, known also as kawa kawa, and has been used for hundreds, maybe thousands of years by Kahuna and Hawaiian practitioners in la'au lapa'au hawaiian herbal practises. This plant was used in ceremony and for healing. It was used sparingly because it had an intoxicating effect. 'Awa was considered by to be a natural pain killer. It quieted the mind, providing good relief for stress. It also helped people sleep. 'Awa was mixed with certain preparations when someone was sick or had a disease in their body to help treat their illnesses and soften the pain until well, if it was God's will. 'Awa was the most sacred herb to the Kahunas and na Kupuna for ceremony. It was hard to find. There are three kinds of 'Awa - white, green, and black.

Mamake has been used in Hawaii and sent through out the world. It was believed to break down the fats in the body, to lose weight, lower cholesterol, and many used mamake to treat high blood pressure. It was considered to be one of the best herbs to clean the blood. It was combined with uha'loa or noni, and was used for diabetes and asthma. Mamake was the most popular herb along with hawaiian noni to treat colds and flu. It was very precious, because it had been believed to help the lungs and respiratory system, making it invaluable to many who suffered from coughing, flu, and asthma.

Taking Mamake and Noni sauce (as the recipe called for) as winter approached was how those in Hawaii believed to help build up the body's immune system to fight what are now considered viruses and bacterial infections.

Noni young was suggested for individuals suffering from Candita, Epstien Barr virus, chronic fatigue, and yeast in the body. If someone suffered from these ailments, there were also other herbs that were suggested to help. As well, there were also suggested changes in diet and lifestyle.

Uhaloa (Waltheria Indica Americana) was gathered in Maui near the ocean and the roots were used for asthma, dry itchy cough, mucous, chest colds or chest congestion. It was also used as a poultice for minor infections.

Note: If you are allergic to mango's you should NEVER drink this tea.

'Alae'a Clay: Used in ceremony, for medicine and for dying sacred cloth and cloths worn in ceremony. Some Kupuna have said it had 30-36 minerals in it. It was used internally for cleaning the blood. It was said that it was the best source among all herbs to get iron, for women in there menstrual cycle to help with moon time, and to stop bleeding and hemorrhaging. 'Alae'a clay was also used for cuts and minor injuries.

'Alae'a Clay was also mixed with other recipes for specific problems. For example, it was used in combination with a certain amount of Noni in the belief that it treated cancer and for cancer prevention. Menopause was not accepted by MANY of the older Kupuna (elder women) in Hawaii, for they started taking 'Alae'a after 40 years of age, or more frequently in their 50's or later. Many Women in Hawaii would take the herbs needed as their body changed. Therefore, they would not suffer any difficult female changes. The earth was incorporated into their daily meals. There was Kane 'Alae'a(male) and Wahine 'Alae'a (female).

'Alae'a was also used for dying sacred cloth, and in ceremony or for skin anointing or painting.

'Olena (turmeric root). Native Hawaiians considered 'Olena sacred as wisdom and knowledge were passed as an oral tradition through chants, Mele (song) and Hula. It has been passed down that 'Olena was used by their ancestors, Na Kupuna, and the Ancient Gods. It has been used for poor circulation, indigestion, stomach problems, nausea, sinus problems, ear infection, diabetes, arthritis, anemia, skin disorders, and bruises. It was believed to be a blood purifier and brought warmth to the body. It was considered a natural anti-bacterial agent, was suggested that it could be combined with Noni.

'Olena could be taken with food to help aid the digestion of protein rich food. It helped digestion and the prevention of gas and bloating.

HAWAIIAN NONI (Morinda Citrifolia/ Indian Mulberry): This was gathered, prepared, and sent with prayers. Noni was known to be used to treat diabetes, high blood pressure, headaches, kidney and bladder disorders, diarrhea, to kill internal parasites, indigestion, stomach ulcers, coughs, Asthma, and respiratory afflictions. It was also used for inflamed or sore gums, gingivitis, thrush, sore throat with cough, arthritis, childbirth and pregnancy and for menstrual cramps mixed with 'Awa. Noni was used extensively to treat and prevent Cancer. It was believed to aid with tumors or malignancies.

For general health Noni was also used my many to slow the aging process, to kill viruses and harmful bacteria, and to build the immune system. When infections occurred it was used for fever with vomiting, cold, and flu. This Hawaiian Noni was not to be confused with Tahitian Noni. Hawaiian Noni was gathered in the Lava fields and in sacred spots near the ocean. Specific healthy trees in Maui and the Hawaiian Islands were selected. This Noni was made in a sacred manner. Noni was believed to be a general promoter of good health.

External Noni: was used for wounds, infections, blemishes, abrasions, boils, carbuncle, rash, skin irritations and irregularities and abscess. It was also used on sprains and broken bones and was believed to aid the healing process. Noni has a pungent smell and taste, like a strong cheese.

Lemi, Pa'kakai, and Hibiscus. This is the last recipe Papa invented with Alalani. Papa believed it was helpful for colds and flu in addition, to internal cleansing. This is made from Hawaiian lemon, salt, and Hibiscus.

Hawaiian Papaya seeds (He'i mikana) (Carica papaya) was used for aiding digestion and tendering protein like fish or meat. It was believed to be helpful in Hawaii for treating stomach cancer. Papaya seeds were used in a pepper grinder to make a black pepper substitute, which was believed to helps the stomach rather then irritate it.

If you have health concerns or questions please consult your doctor. We do not give medical advice.